If you take a look at different web projects or software products, you probably experience bug tracking as the least fun part of every projects. Right? (If not, please let us know in the comments how you get fun out of the bug tracking process)

We think that bug tracking should be fun. And because of this, we believe in the power of emojis making bug reports at least more emotional.

You wonder why bug reporting isn’t that fun?

On the one hand, having bugs on your website or within your web app isn’t that fun at all. We – as developers, designers and project managers – live up to a bug-free software to make our user’s experience as great as possible. And a bug isn’t a great experience for our users.

On the other hand, the person finding a bug should provide all relevant information about the appeared error. As you can see in the following image below it requires to track down quite some information for filing a good bug report. 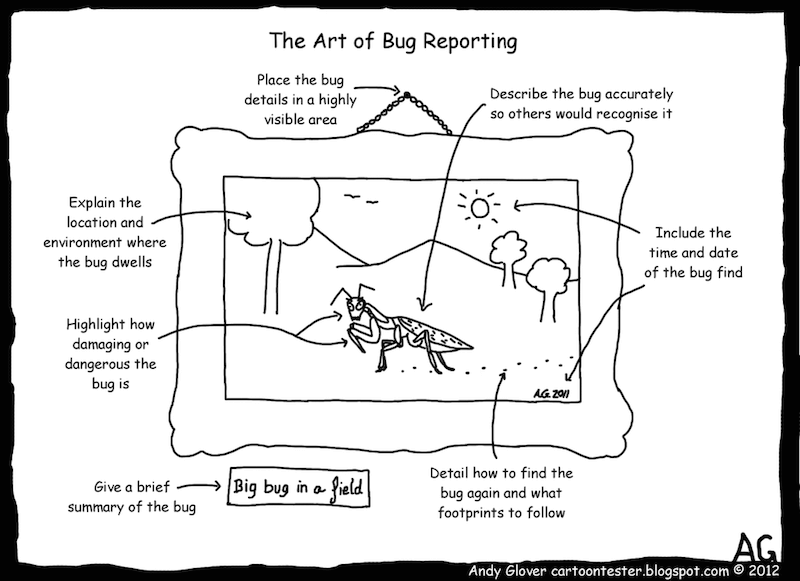 You probably feel the pain of tracking bugs now. Tracking down bugs not only requires a great amount of time, but also basic (technical) skills in the fields of software engineering.

Why bug tracking should be fun.

We at Usersnap used the claim “a screenshot paints a thousand words” for quite some time and it made our aim as a bug tracker clear.

Communicating with screenshots, images and other visual elements is faster, easier and way more expressive than via plain text. Emojis do bring this visual communication on the next level.

Knowing how your opposite feels about certain things will make your actions more efficient. By adding feelings and emotions to bug reports we believe that people will have a much better time than without them.

In the old days bug reports looked like this: 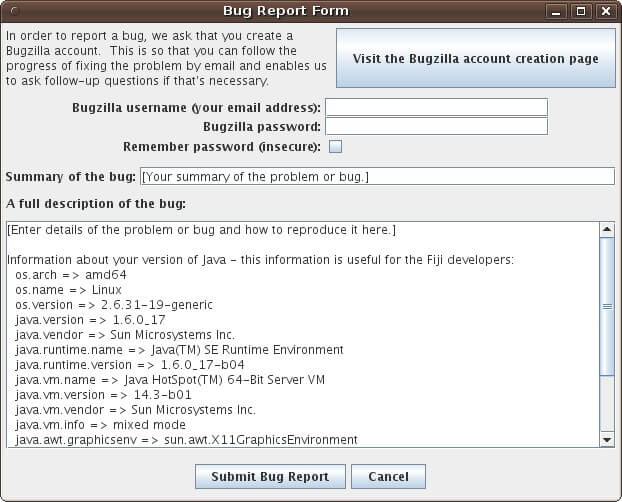 We imagine a bug report to look like this one: 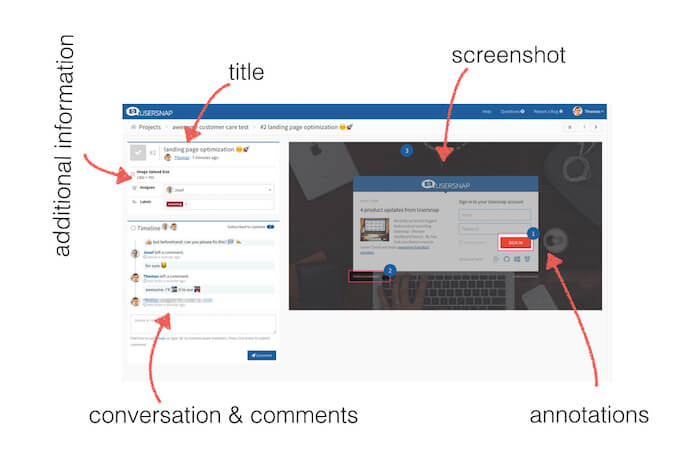 Ways to express oneself

As mentioned in the intro, a bug report should contain every single piece of information which is needed to reproduce a bug. Highlighting how the damage of a bug has a lot to do with the feelings a certain issue caused.

The exploding usage of emojis

My mum uses emojis. I use emojis. And even grown men should use emojis according to a recent New York Times article.

The 🙂 was the invented in 1982 by Scott E. Fahlman after a fake message (which should have been a joke) was placed on a digital board at the Carnegie Mellon University. The rest of the simley is history. Since emojis were introduced in Unicode in 2010 and Apple added the emoji keyboard to iOS in 2011 our written language has evolved.

Instagram – for example – stated that “nearly half of comments and captions on Instagram contain emoji characters”. That’s huge!

However, the usage of emojis isn’t really linked to the technological innovations we’ve seen in the last couple of years. It’s more a human thing.

The way we express emotions online is still struggling. And the reason is pretty simple: Compared to offline, online communication is still rudimentary. Emojis and other ways for expressing feelings and emotions online are just the beginning.

If you’re asking now: Is it acceptable to use emojis in business communication? Well, yeah for sure! In one survey, conducted in May 2014, 76 percent of Americans stated that they have used emoji in work related communication.

How emojis are used in bug reports (backed by data)

So we were asking ourselves: How are emojis used in bug reports?

One might even argue that you shouldn’t use emojis in bug reports. To answer this question, we took a look at our own data and analysed all bug reports which has ever been created with the Usersnap bug tracking tool.

The usage of bug reporting is highly increasing since we “officially” introduced emojis (as we know them today) in mid 2014.

Bug reporting is sometimes experienced as the most stressful part of a project. However, we’ve seen that most emojis which are used in bug reports express a more positive feeling than a negative one.

Here are the most used emojis in Usersnap bug reports: 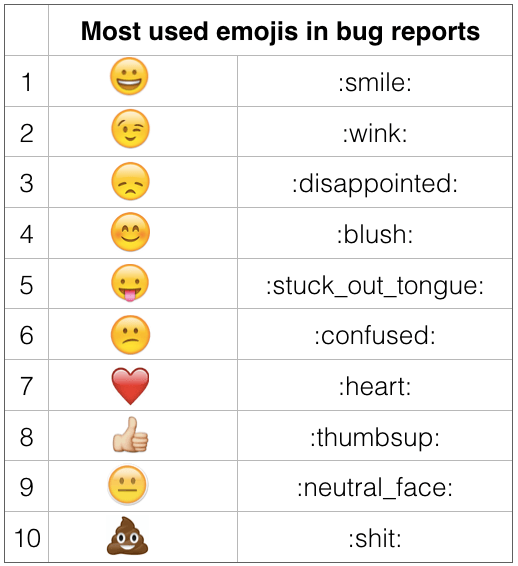 As you can see the most used one is the smiley. However we see a great usage of the disappointed emoji which can be directly correlated to the feeling which arises when someone discovers a bug. 🙁

What is your favourite emoji? Which one are you using in bug reports? Let us know in the comments!

PS: Make sure to check out the Emoji Cheat Sheet.

PPS: Interested in real-time data on the emoji usage? Check out how people use emojis on twitter.