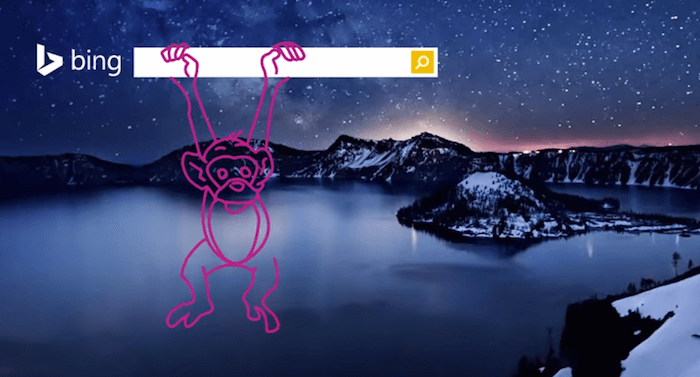 This is a review on Microsoft’s new browser Edge and what every developer should know about developing with Microsoft Edge.

Microsoft officially released Windows 10 today making a huge step forward. With its all new browser, called Edge, Microsoft is trying to catch up with Chrome and Firefox.

We’ve downloaded Windows 10 and took a look on how Microsoft Edge may influence the daily work of developers. Here’s our first impression of Edge.

Microsoft claimed to have re-built its internet browser from scratch. With its piles of legacy code, the Internet Explorer has somehow become the unbeloved browser in today’s world.

Luckily, Microsoft noticed that problem and built Edge. They claim that Edge is super fast and that it supports more web standards than ever.

The browser feels light and fast. At least way lighter than Internet Explorer felt the last time we gave it a try. (I don’t want to bash IE here, since Microsoft had undertaken quite a few good efforts with IE 11).

Edge really feels like a “new” browser. It doesn’t feel like an update of Internet Explorer. It feels like a new browser. And that’s a good thing.

Though, I have to say that the Desktop icon “E” still reminds me on its predecessor.

As said, Edge feels like a new browser. From a user experience. If you take a deeper look inside the engine, it isn’t all that new actually.

So, you might ask and wonder if it’s possible to go back developing with Edge and turn your back to Chrome and Firefox. Here’s what Edge has to offer for developers.

The DOM Explorer tool basically shows you the structure of a certain webpage. It allows developers to edit HTML and CSS on a page. 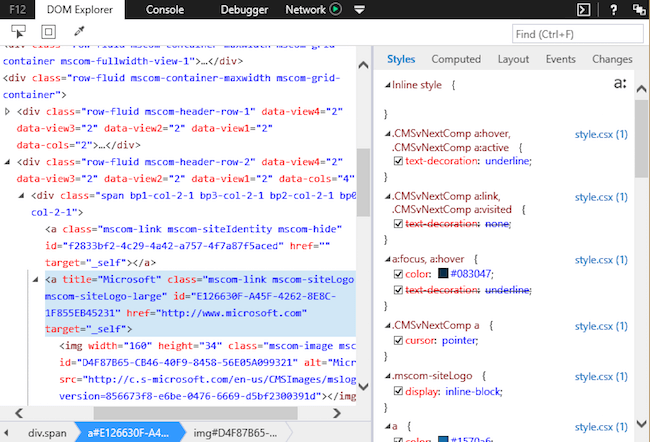 The so-called DOM Explorer tool allows you to do the same things as you would do with the Chrome or Firefox Dev Tools’ element picker.

Similar to the console in Firefox or Chrome, the Console tool of Edge allows you to interact with the Javascript parts on a particular website. It also serves as central place for error messages and status codes. 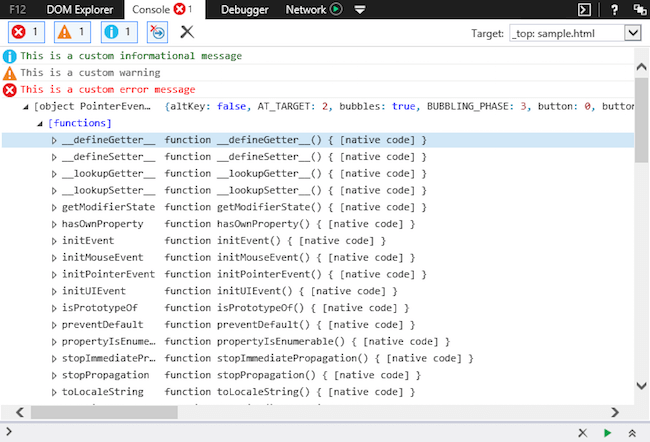 The console of Edge feels quite tidy in comparison to Firefox’ and Chrome’s console. The interface is completely uncluttered and easy to understand.

The network tool gives you some great details of network requests involved in the loading of a webpage. Again, it offers similar features as the network tool inside Chrome. 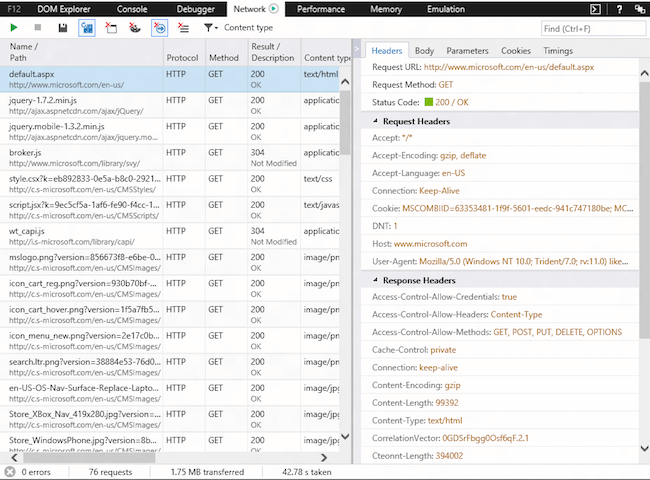 You might be wondering how your website performs and renders on different devices or screen sizes. The emulation tool is great for testing your (responsive) web design and how it is displayed on your latest mobile phone. You get even further options such as de-/activating GPS (which isn’t available with the Google developer tools for example). 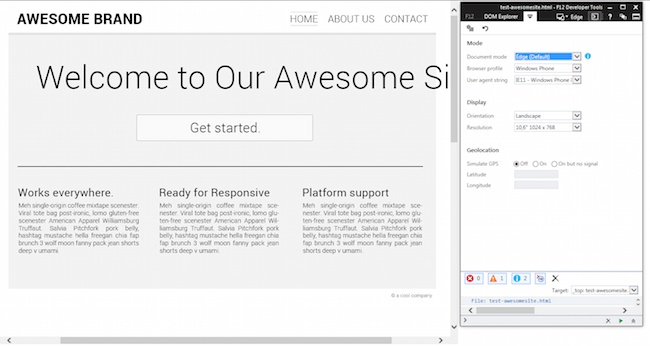 Last but not least: Speed. If the mentioned developer tools sound quite interesting to you, you might wonder how Edge competes in terms of speed. I guess you all reminder those jokes on the slowness of the IE, right? 🙂 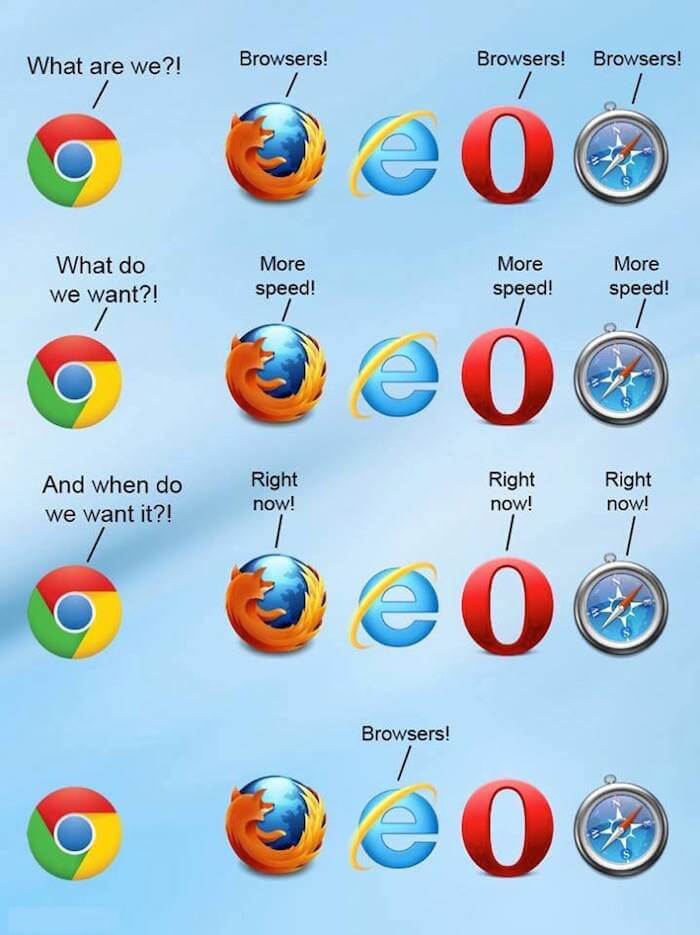 The good news is: Microsoft Edge’s can definitely compete with Chrome and Firefox in terms of speed and loading times.

Other tests came to the same or similar results. Google Chrome seems still to be the fastest browser available, closely followed by Microsoft Edge which we haven’t really expected.

It really seems that Microsoft is on its right track with Edge. It is fast and has a slick design. However, there’s one big drawback when choosing Edge. There are no browser extensions available. At least for now. According to a recent ‘The Next Web’ article, Microsoft has said it will support extensions “soon”.

So, if you’re used to all kind of extensions for being more productive, this might be some bad news which probably keeps you away from using Edge.

In the current preview, extensions need to be installed manually.

You can learn more at the Microsoft Edge extension page.

With the presented tools, Microsoft did a lot to catch up with the Firefox and Chrome. Though it seems that the developer tools haven’t been updated for Edge if compared to the previous IE versions. Especially mobile emulation is quite unhandy with Edge’s emulation tool and doesn’t provide any additional value compared to the feature-rich options in Google Chrome.

So, if you’re already using the IE 11 (or 10) there’s no reason to upgrade to Edge (from a development perspective). All in all, the developer tools in Edge seem a bit spartanic compared to the easy-to-use Chrome dev tools.

For the time being we definitely keep a close eye on Microsoft’s Edge, while we go back developing with Google Chrome and Mozilla Firefox.

What do you think about the new developer tools inside Microsoft’s Edge?