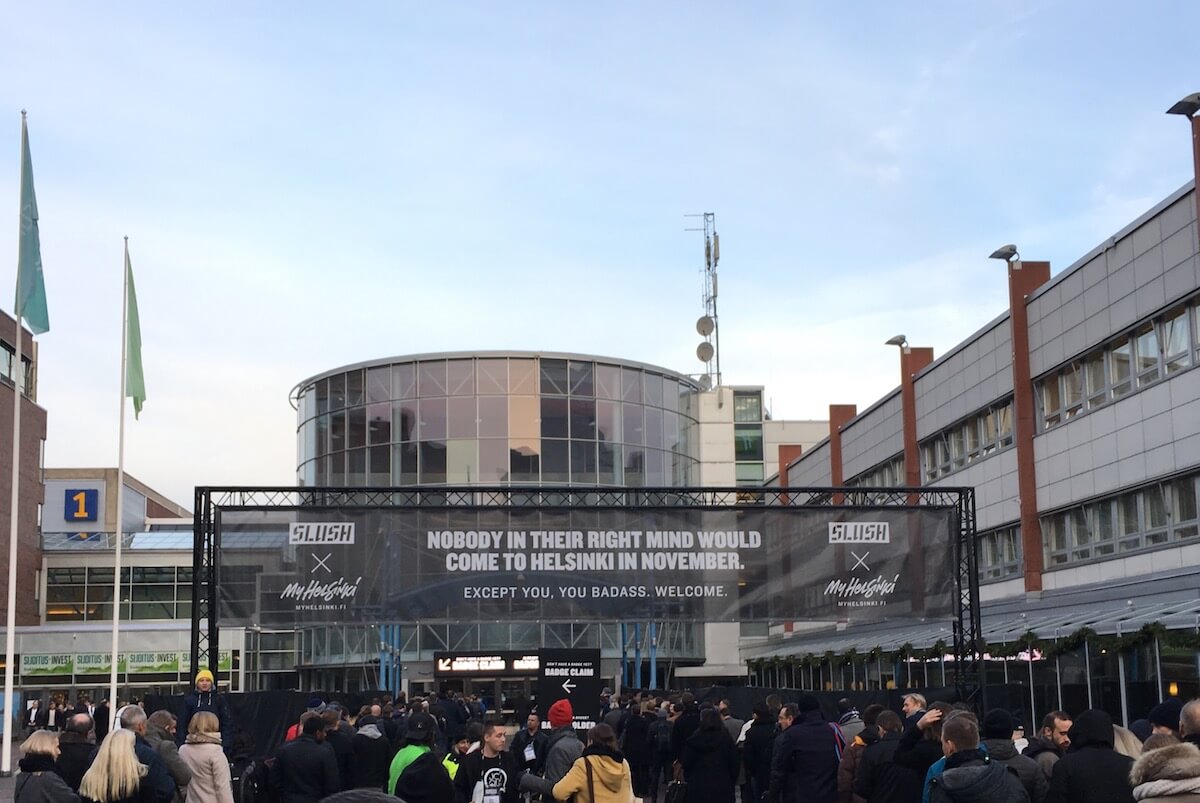 The Slush Conference in Helsinki (Nov. 30th to Dec. 1st) is one of the biggest startup events in Europe with around 17,500 participants. Besides 2,000 startups from all over the world, this year’s event also featured around 1,000 investors and 2,500 volunteers.

Upon entering the conference hall for the first time, it became clear that the darkness of Finland in November is part of the event’s aesthetic concept: dark halls, lasers and fog machines that delivered punchlines in the form of smoke during the presentations, embodied Slush’s motto perfectly:

“Nobody in their right mind would come to Helsinki in November. Except you, you badass. Welcome.”

Slush invited some huge big names to the conference, including Chris Sacca, Arielle Zuckerberg, the Crown Prince of Norway, Haakon Magnus, as well as the President of Argentina.

On the huge exhibition hall’s six stages, the topics for two days were food tech, finance, sex tech, health and big data. Presentations like “Redesigning Death” or “AI, Big Data, and the future of sex tech” were wildly popular.
On the Pitching Stage, 100 selected founders were able to discuss their ideas on the big stage and in front of investors as part of the Slush 100 Pitching Competition.

If you want to watch some of the talks, I can recommend Slush’s YouTube channel: https://www.youtube.com/user/KickNetwork

The talks and events of the conference were supplemented by an Expo, where companies were able to present their businesses. This also didn’t just feature Scandinavian startups, but also big companies like Google and startups from all over the world.

The Slush Opportunities for Startups

The conference is very interesting for startups. Here are some of the main reasons why:

Slush is so massive that a good preparation is absolutely essential. The more you invest in advance, the more you will get out of it at the conference.

The Scandinavian countries have produced a number of technological superstars, with companies including Skype, Spotify, Supercell, Zendesk or MySQL.

Slush plays a big role in achieving success for Finnish startups, who plan their lives in a “pre-slush / post-slush” way, as Kevin Linser of Selma Finance explained to me. The native Austrian chose Finland as the home for his company in 2014. Slush has established itself as such a big brand that the conference is now also held in Tokyo and Shanghai.

All Is Great? Not Entirely!

On Monday, Slush posted the following statement on their Facebook Page: 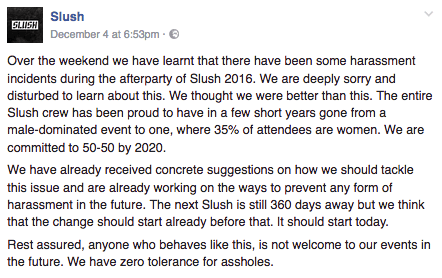 At the after party, there had been multiple instances where women were harassed by men. For something like this to happen at a conference that stands for progress and innovation, is absolutely shocking. Not only the fact that things like these still happen in 2016, but also that the startup scene cannot rid itself of sexist attitudes and actions.

In contrast to what happened for example at the Noah Conference and the ensuing #escortgate scandal, the example of the organizers of Slush is in this case exemplary.

The unambiguous statement “zero tolerance for assholes” and the quick reaction of the organizers is absolutely commendable. The effort to push equality could be felt all the way during the Slush conference. The event did not only have a comparatively high ratio of women with 35%, but also featured a host of great female speakers like Stephanie Alys of Mystery Vibe. We can only hope that incidents like the one at the afterparty will be a thing of the past next year.